With food delivery orders on the rise, Domino’s Pizza are embracing electric transport. And Kiwi business UBCO is providing new electric motorbikes for the growing Domino’s fleet; two Kiwi businesses innovating for the good of the planet (and pizza!)

When New Zealand moved from Covid-19 Alert Level 4 to level 3 on April 28, fast food restaurants all over the country were overwhelmed with demand for takeaways. In fact, according to Senior ASB Economist Jane Turner, New Zealanders ate their way through five-weeks' worth of takeaways during the first week of Level 3. And right in the thick of the takeaway rush was Domino's Pizza. In mid-April, preparing for re-opening, Domino’s began searching for 1,000 new team members.

Back then, Domino’s New Zealand General Manager Cameron Toomey said, “based on an increase in deliveries pre-lockdown and examining trends around the world, we anticipate an increased level of deliveries once we open again, as many people remain at home."

Turns out they were right in predicting higher demand. And as we rolled through Alert Level 2 and into Level 1, that demand looks likely to stay. Domino’s also realised that increased demand for deliveries and a growing team would drive the requirement for more delivery vehicles.

"The UBCO bikes have several advantages over cars when it comes to deliveries," Toomey says. "They are faster through heavy traffic, parking isn't an issue, they're cheaper to run, and more environmentally friendly. Our delivery teams safely deliver thousands of pizzas each week and we see the UBCO bikes as an important part of our fleet going forward."

With the Domino’s delivery fleet averaging between 10-20,000 kms per year, UBCO's fixed servicing benefit becomes an important part of the ongoing fleet management.

"It's pretty satisfying," UBCO CEO, Timothy Allan says, "watching the bikes growing in use within the Domino’s fleet and replacing other traditional combustion vehicles. Our bikes are reducing Dominos’ environmental footprint and at the same time, delivering quickly and more safely. It's also exciting to work with such a progressive brand like Domino's that innovate in all facets of their business."

Both Toomey and Allan agree that the UBCO 2X2 makes a great delivery vehicle. The UBCO 2X2 is not your standard electric bike. UBCO has, in effect, created a new category of vehicle called an ‘Electric Utility Bike’. Originally developed for off-road use, the utility bike has drawn an increasing following for on-road use in a variety of sectors such as commuting, prepared food and grocery delivery, postal and freight. 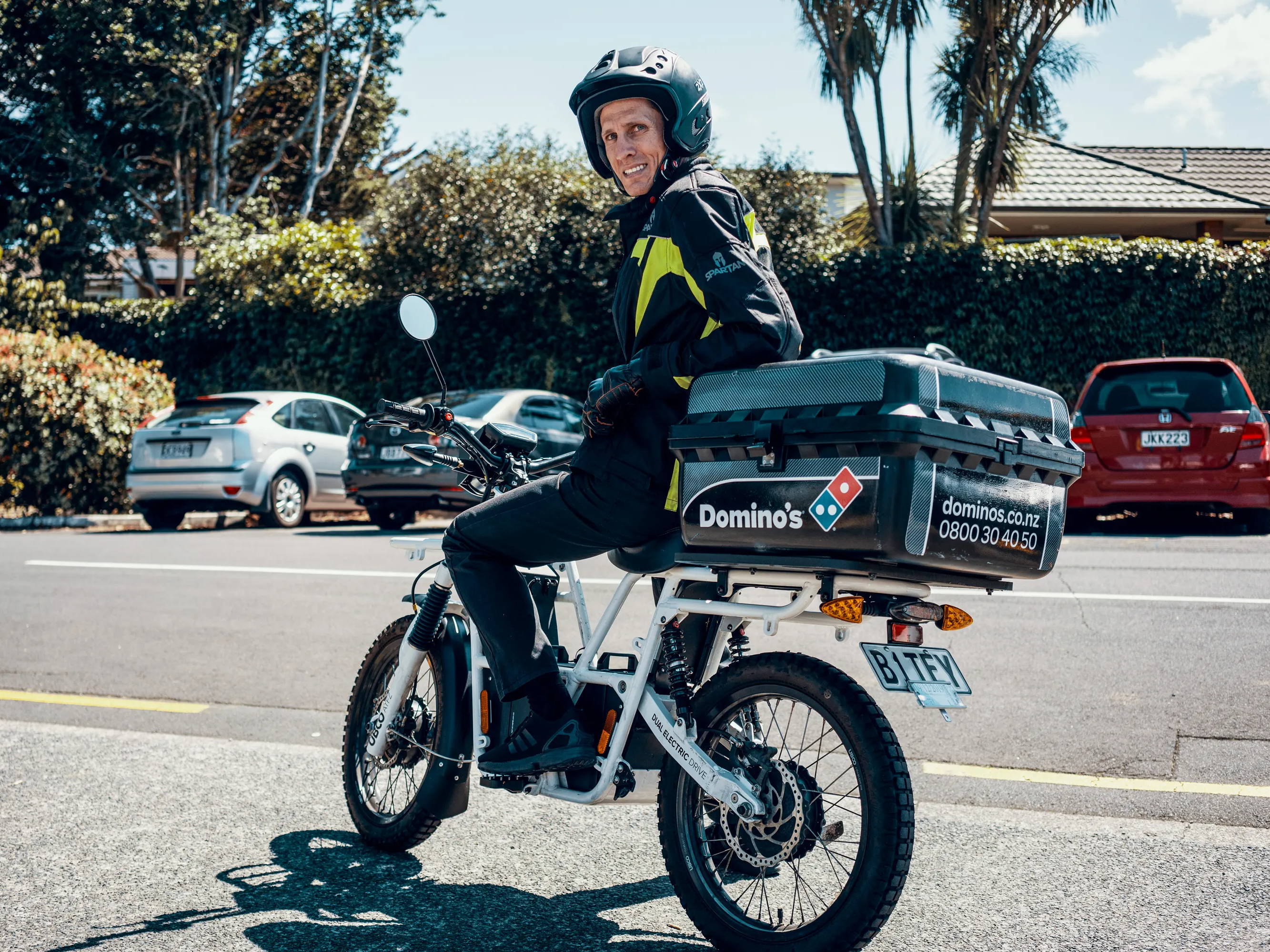 Domino's NZ Cameron Toomey on an UBCO 2X2 with a delivery box prototype loaded on the rear rack. 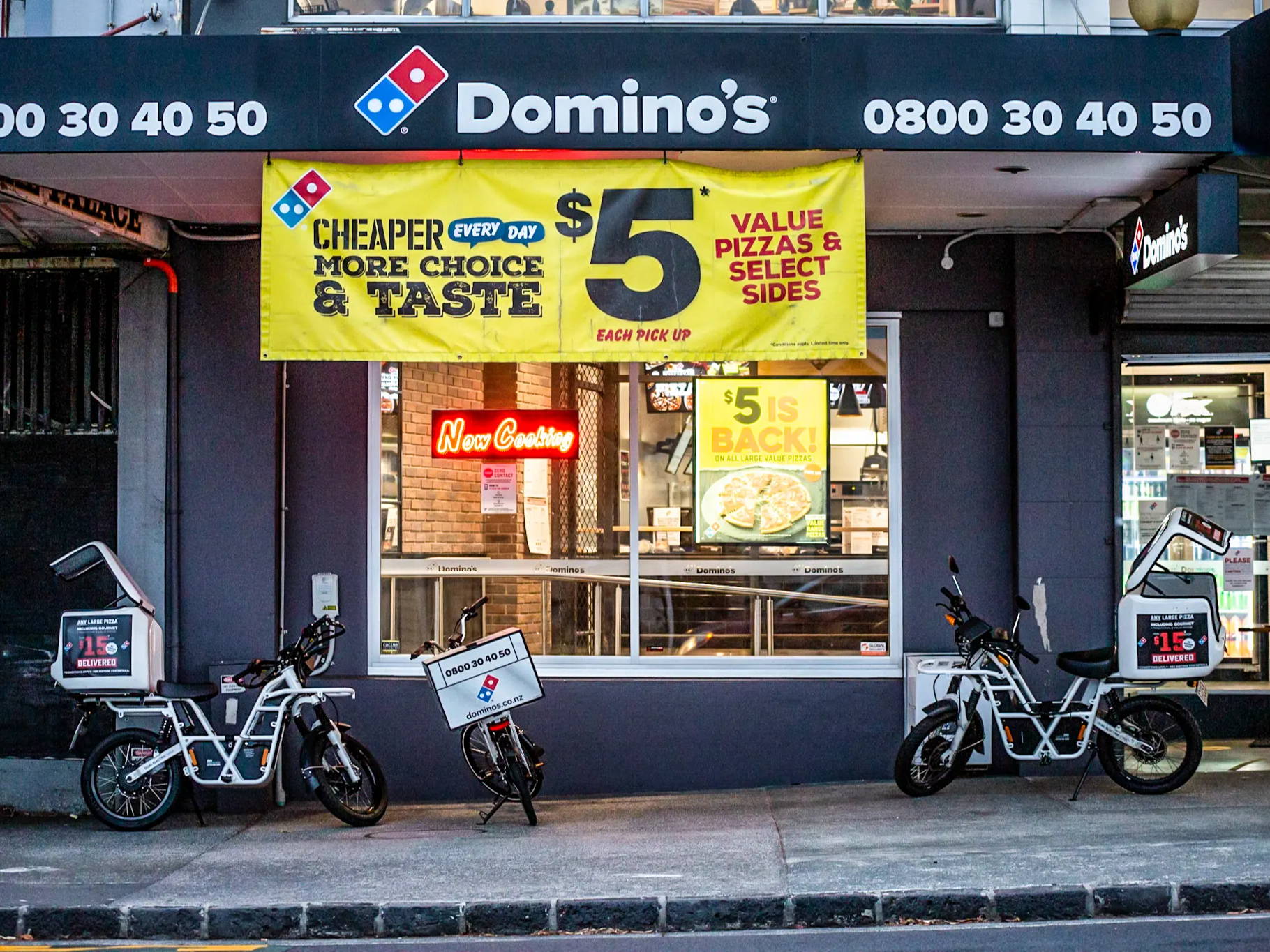 A busy Domino's shop in Auckland ready to deliver pizzas on their 2X2s.

Could an UBCO 2X2 help you delivery? Shop now or test ride a 2X2 at your nearest dealer.