Down on the farm, things just got a whole lot quieter, thanks to a Kiwi invention.

“Plug in the farm bike, Trev, she needs a charge.” It’s not a line you expect to hear in the New Zealand backblocks, where a roaring, petrol-fuelled Suzuki, Honda or the like has been the preferred tool of trade for generations. But an innovative Kiwi firm aims to change all that, with the world’s first electric-powered farm bike. Known as the UBCO 2×2, it weighs a mere 65kg, has a range of 120km, costs virtually nothing to run or maintain, and – even better from a farmer’s point of view – is almost impossible to get stuck. Quiet for the sheep, too.

But the UBCO is more than a farm bike.Since 2015, the company has been in
fast-track development mode, and this year released a dual-purpose, road-legal version, opening up a whole new market. Posties and couriers are now in the frame, along with urban commuters wanting the versatility of a bike that can also be used to ride trails during the weekends.

“We’ve even had people putting Steadicams on the back and using them for filming,” says CEO and co-founder Timothy Allan, who sees big potential for the UBCO as a fleet vehicle for tourism businesses and conservation organisations. “There’s a strong natural fit in the conservation space. Someone doing track maintenance would never hear the end of it if they went past 20 people on a two-stroke.”

This year is proving a pivotal one for the Tauranga-based firm, which has also rolled out its first range of accessories
(pannier frames and bags, among other things), developed a portable power pack that can be used for tools and camping equipment, and is about to introduce telematics (onboard technology) and subscription software. Meanwhile, overseas interest in the UBCO bike is ramping up in markets such as Australia and the US.

It’s all a very long way from the 2014 Fieldays, where a bare metal prototype was displayed by the initial partners, Anthony Clyde and Daryl Neal, both of whom came from the e-bike industry. At the time, Allan was just another spectator at Fieldays, albeit a highly interested one. His product development company, Locus Research, had sponsored the Fieldays Innovations Awards. Not only was he impressed by Clyde and Neal’s prototype, which cleaned up in the awards, he was swayed by their in-depth knowledge of the e-bike supply chain in Asia, a big advantage for development and production. The three of them founded UBCO Ltd the following year. 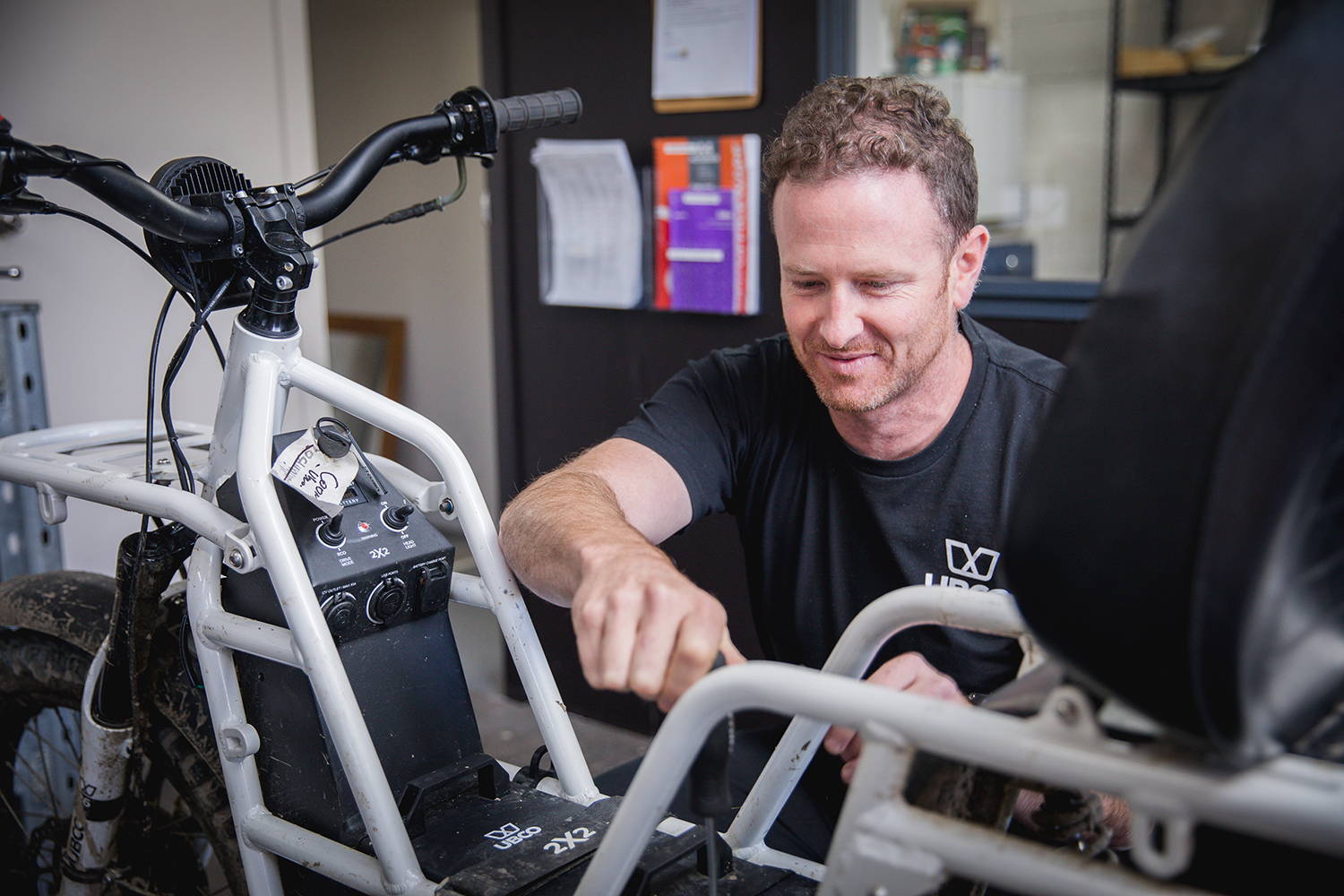 Leaving aside the money saved on fuel and maintenance – the farm environment is far tougher on motorbikes than most settings, he points out – an electric bike is wonderfully quiet. “Simply removing the noise of a motor in that environment is compelling. Suddenly, you can hear the birds and animals, and it’s a lot more pleasant. Early on, we had one farmer, a guy who does 70km a day strip-grazing in Southland, and we would struggle to get the bike back from him to service it – because of the ‘noise thing’.”

"WE GOT PEOPLE TO USE THE BIKE IMMEDIATELY AND THAT WAS THE RIGHT CHOICE BECAUSE WHEN YOU SEE HOW SOME OF THE FARMERS USE IT, THERE’S NO WAY WE COULD SIMULATE THAT.’

In 2015, the partners went to work developing a production model, drawing less from the world of motorbikes than the technology developed by the e-bike and mountain-bike industries. This included highest-grade aluminium alloy tubing for the frame, disc brakes and downhill-style suspension, mostly from e-bike manufacturing hubs in China.

It was challenging, Allan says. “Those electric bikes, the power they use is inadequate for our purposes, so everything had to be developed – your spark plugs, your leads… Everything was outside what they were used to supplying.”

Rather than “working away in a garage to make it perfect”, they pursued a different development path, getting that first model into farmers’ hands to test and suggest improvements. “We got people to use the bike immediately and that was the right choice, because when you see how some of the farmers use the product, there’s no way we could simulate that. Sometimes you think, ‘How is that possible?’ It meant we learned at a very rapid pace in the
real world.”

He describes the UBCO, with its step-through frame and bare-bones aesthetic, as “unashamedly utilitarian”. Nevertheless, the design, including the black and white scheme, is highly considered, and a big factor in the bike’s appeal. “If you look at other electric motorcycles, from 50 feet away they look like a motorcycle. At 50 feet, the only thing in the world that this looks like is an UBCO,” says Allan, who adds that the bike’s uniqueness goes beyond its appearance.

“We’ve got something here that’s very different from a traditional motorbike. You have accessories, things that can be attached to the sub-frame to hold tools or equipment. When we say it’s a utility vehicle, we really mean it.”

The new iteration of the bike retains the original look, but to qualify as road-legal much has changed, including the supply chain. The UBCO is now manufactured by Chinese electric bike and scooter outfit Yadea. It’s been an opportunity for other improvements, using everything they’ve learned from user feedback. Among other things, the 2018 model includes a New Zealand-developed engine control unit, the brain of the system.

Allan describes the UBCO as a “90 percent electronic product”, and now includes over-the-air updates, remote diagnostics and user-control via smart phone. “There’s an on-road and off-road setting, and we have things like hunting mode, which switches off the indicators and lights when the ignition is on, meaning you can go ‘stealthy’. We’ve also ot traction control, which will go out to all the existing 2018 bikes in the next upgrade run.” All of which should prove popular with customers in the US, where the company is targeting the recreational market, including hunters, campers and the RV (recreational vehicle) set.

The push into the US was sparked by an early rave review of the UBCO on influential gear-geek website Uncrate (uncrate.com), and has been facilitated by an investment by US tech entrepreneurs Bob and Ethan Ralston, part of a 2017 round that raised
$3.95 million. With the Ralstons and other US investors, UBCO has formed a distribution company in Oregon to unlock the US market.

Not long ago, Allan was quoted as saying UBCO was aiming to reach 10,000 sales a year within five years. Things have moved on. “We believe the market is substantially bigger than that,” says the CEO, who doesn’t see any immediate competition in UBCO’s niche.

Another reason for the expanded ambition is that UBCO has decided to develop a four-wheel version, which is slated for release by 2021. “We felt we had to do something substantially different to be meaningful, and that we had to have an approach that would make it safe – those two things came together last year,” says Allan. He cites the rapid improvement of sensor technology in autonomous vehicles as an important development.

"NOT SO LONG AGO, ALLAN SAID UBCO WAS AIMING TO REACH 10,000 SALES A YEAR WITHIN FIVE YEARS. THINGS HAVE MOVED ON. ‘WE BELIEVE THE MARKET IS SUBSTANTIALLY BIGGER THAN THAT."

There’s plenty more to come, including a stripped-back, dedicated off-road bike, and a “no trade-offs” update of the on-road bike. That one “takes everything we’ve learned, and applies all of those lessons without compromise”, says Allan.

The future looks bright and UBCO is ripping towards it at full throttle – and in near silence.