Formed in 1972, the Catalina Island Conservancy is one of California’s oldest land trusts. They protect the magnificent natural and cultural heritage of Catalina Island, and with the help of both full time and volunteer Rangers, stewards approximately 42,000 acres of land and more than 60 miles of unspoiled beaches and secluded coves. The island is home to the longest publicly accessible stretch of undeveloped coastline in Southern California, an impressive 50 miles of biking tracks and nearly 165 miles of hiking opportunities, making it a hub of activity with over 1 million visitors every year.

Scott Patterson and Joe Dlugokecki are two Volunteer Rangers with a wealth of experience, knowledge, and passion for their work. With over 30 years of Catalina Ranger volunteer work between them, Scott and Joe have been involved in hundreds of Ranger patrols on the island.

Life as a Ranger

For Joe, being a ranger was a childhood dream. “I wanted to be a ranger since I was a little kid, but I was born and raised in New York City so all I could do was read books and watch movies. After working a bunch of hard years and retiring, I came over here and just couldn’t believe it – the scuba diving is fantastic and I happened to connect with one of the professional rangers and he said we’d love to have volunteers so I jumped on it, signed up and have been doing it for the last 15 years.”

To Joe and Scott, being a ranger is all about being the eyes and ears of the Conservancy, whether that’s patrolling, educating, or enforcement. As Scott explains, ranger work comes in many shapes and forms.

“During my time as a ranger I have conducted patrols in trucks, boats, and even my airplane – I fly along the windward side of the island and have found a couple of boats that have floundered. We hand out water and give directions and distances, which is very important because people underestimate how far it is from A to B. Then, every once in a while, we’ll run into something unusual. I recently picked up a guy who had a compound fracture in his arm and I had to take him to the hospital. There is a real integration of services on the island, which are well defined. As volunteer rangers, our role is to be the eyes and ears, and call in search and rescue, or the paramedics when they’re needed, such as treating heat prostration, because we aren’t the pros in that field.”

“We are helping people every chance we get – whether that’s providing water, or caring to an injury. We’re not busy all day long, but when we are, a lot of the time it is a critical situation.” 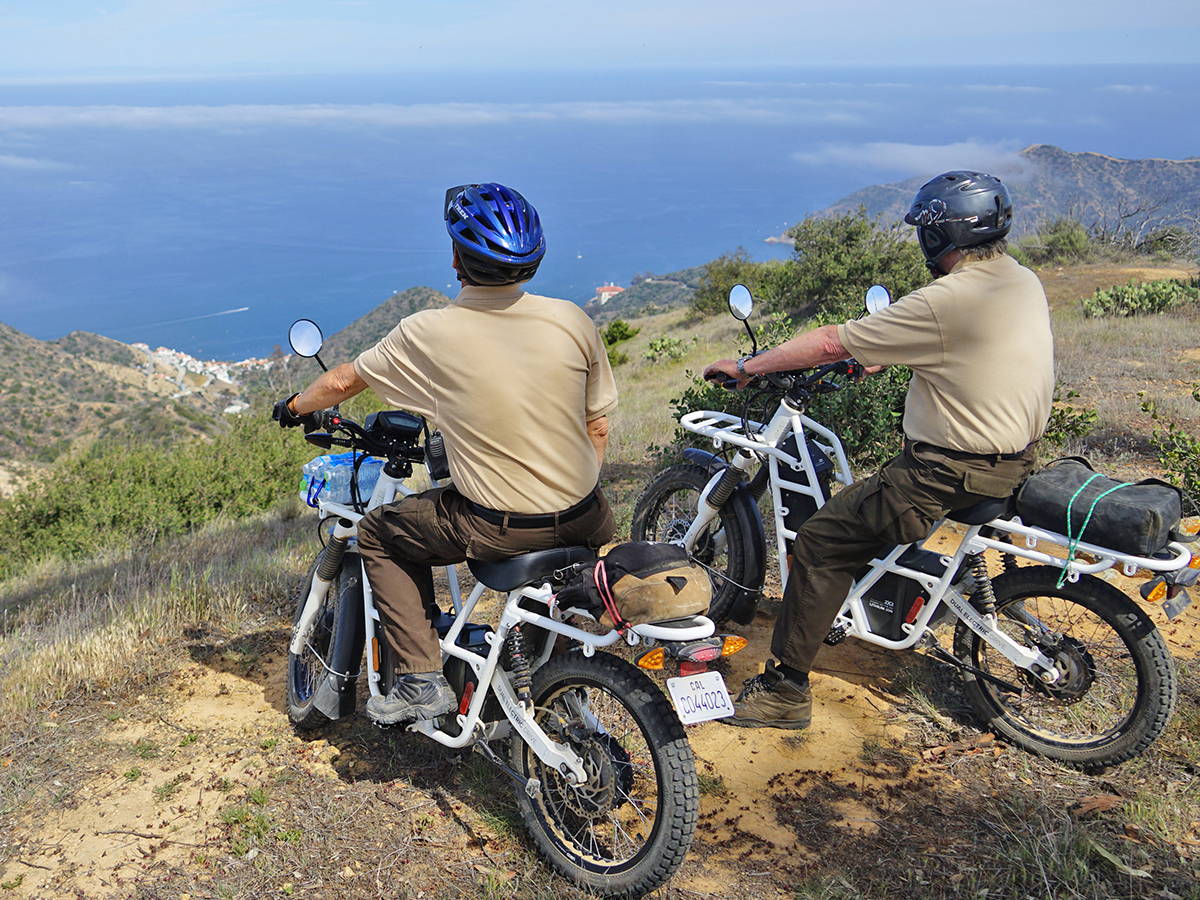 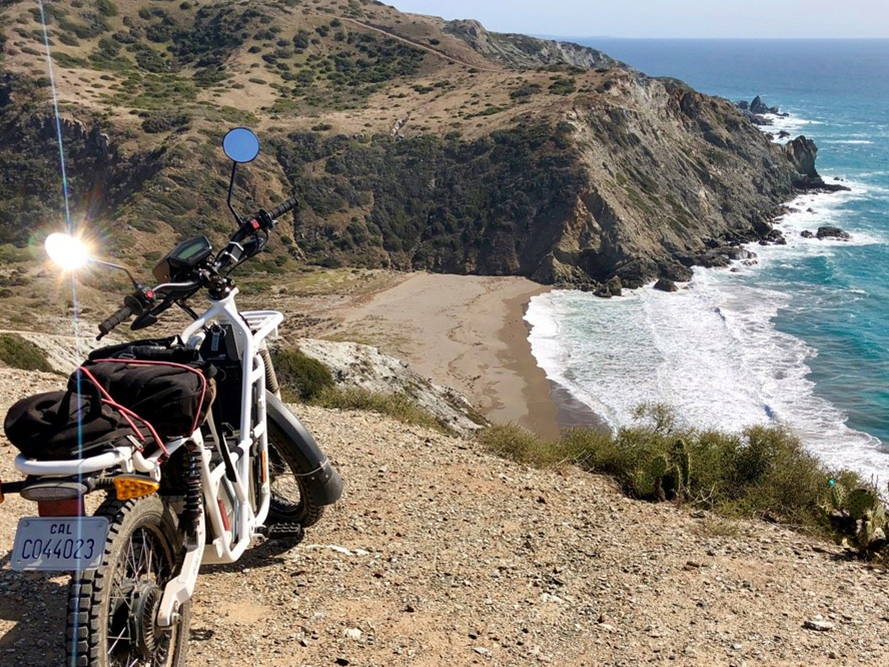 The beautiful scenery is just one of the many draws for the 1 million annual visitors.

Until recently, Joe and Scott had been using a 4-wheel drive truck to conduct their patrols. However, after seeing Mike King of Catalina Yamaha driving around on his UBCO 2X2, things changed.

“I saw Mike riding around on his 2X2 and stopped to ask him about it. It was love at first sight and I bought one immediately. I could instantly see the advantages of this bike and knew I needed to approach the Conservancy about getting these authorized for official ranger use so Joe and myself could use them for work.”

For Scott, it all comes down to access, reliability, and the ability to stop and interact with people on the trails.

“The 2X2 provides a richer exposure to the Island’s natural environment – when you’re inside a vehicle there’s an implied separation between you and your environment. On the 2X2, we often find ourselves stopping just to be a part of the outside experience – it’s fundamentally different than riding in a ranger vehicle; it’s more engaging. In fact, I put a tray of water bottles on the front of my bike so people can say, “Hey, I could use a bottle of water” because dehydration is a big deal here.”

For Joe, the UBCO 2X2 is the way forward. “I absolutely love the 2X2, it’s a whole new experience and it changes the way we engage with the public – they’re the way to go. It’s a quick response, remote access vehicle, and with people getting into trouble on the trails, they just make sense.”

Over the last two months, Joe and Scott have been working on pulling together an independent report for the Conservancy on the 2X2’s capabilities, including how fast and far they can go on a single charge and how much charge they have left after certain runs, because as Scott explains, they need to know their limitations, especially in critical situations.

“We have concluded that we have two modes of riding – causal riding during patrols and critical riding where we are responding to calls. We might get a call asking if any ranger can be at this point immediately to assess a situation, which could anything from a biker who has fallen to a hiker who’s dehydrated. Whatever it might be, we need to know how fast and far we can go, and make sure we have the capabilities to deal with the situation at hand.”

Bring on the Adventure

Looking forward, Joe and Scott would like to see more and more UBCO 2X2s on the island. “We’d like to do more challenging rides – we haven’t been to Two Harbors on the bikes yet. Once we arrange for a charger or battery swap at the other end of the island, we’ll be able to commit to a full day of patrolling.”

Do you want to help the Catalina Island Conservancy? As a non-profit organization, donations are always welcome. Click here to donate today. Alternatively, they are always on the lookout for more volunteers. You can sign up to become a Volunteer by clicking here. 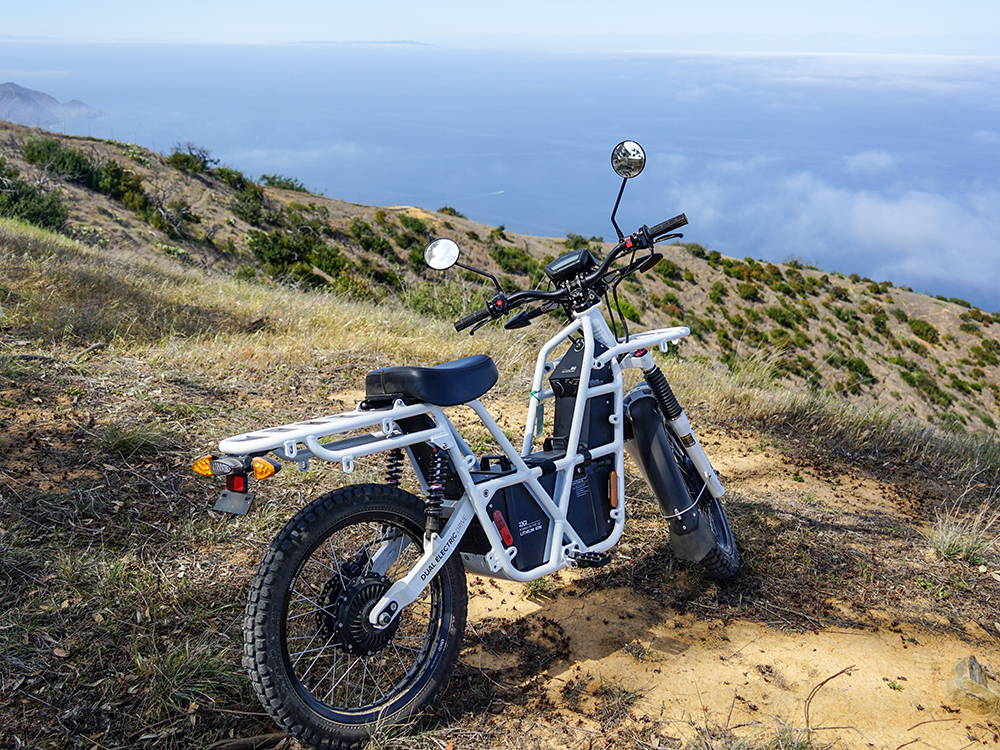 The trails on Catalina Island can take you above the clouds. 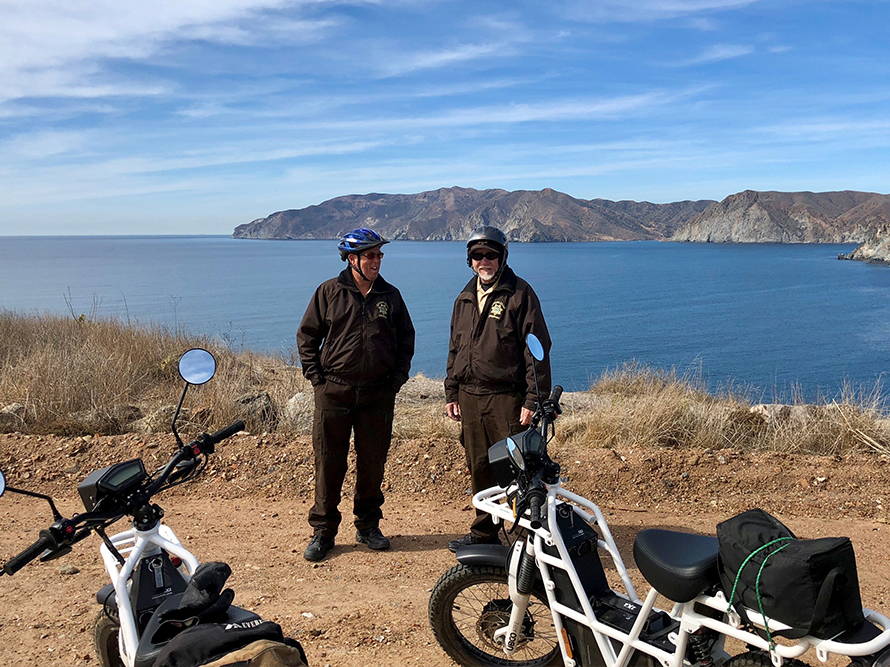 Joe and Scott take a break from volunteer ranger duties.

A big thank you to Joe and Scott for your time, and for showing us around your beautiful island. Could an UBCO 2X2 be the silent tool in your conservation efforts? Shop now or test ride a 2X2 at your nearest dealer.